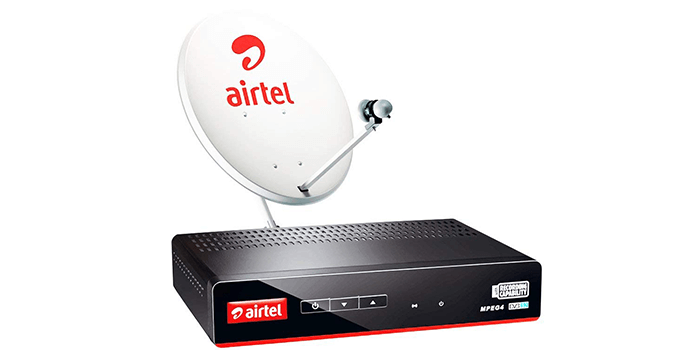 Television is one of the most common forms of modern entertainment. Even though streaming services are gaining popularity fast, television channels are not going to be obsolete any time soon. Most houses have a television set in the house so that people can watch the shows of their choice. There is a multitude of channels in varying languages. They can become a good companion for people of any age. One of the most convenient ways to watch television is to have a DTH connection at home. Let us take a look at the top 4 DTH providers in the country in 2019, the best being Airtel DTH plans.

Tata Sky was a joint venture between 20th Century Fox and the Tata Group and became the second player in the DTH market in the country. Launched in 2006, it is one of the top DTH brands in India today. HD channels were added, which added to the customer base. One of the biggest achievements of Tata Sky is probably the live telecast of the quarter-final of 2014 FIFA World Cup in 4K UHD. It was the first DTH brand to offer customers the option to record, pause and play or even rewind live TV.

Reliance TV was launched in 2008 as Reliance Big TV and later became popular as Reliance TV. It is a subsidiary of Reliance Communications. The service from the company is available throughout pan India. Not only is there an interesting plethora of channels bringing news, sports, lifestyle, movies, music and other entertainment shows, but you also get to watch a lot of mainstream and regional languages. There is also the option for free Internet games and pay per view movies.

DishTV is a product of ZeeTV and is very popular throughout the country. DishTV is the DTH provider in India and still retains its position as one of the leading players with constant upgrades in technology. It offers a wide range of channels that appeal to a huge audience. It offers some of the cheapest services in the country. The economic plans make it quite popular among the Indian people. There are features like games, interactive TV, child lock and an expansive range of Hindi, English and local channels. Customers are offered bundles of channels at good rates.

Launched back in 2008, Airtel is the leading DTH service provider in India. There are millions of subscribers in India and its wide variety of channels featuring movies, lifestyle, entertainment, sports and education make it very popular to everyone. Airtel DTH plans have a lot to offer in regional languages as well. Users can record programs and have multiple connections through a single dish. This is beneficial when housing complexes subscribe to the same provider. The customer service offered by Airtel is really. On top of everything, with the Android apps and the official website, it is pretty easy to make new connections and recharge the subscription.

These are some of the best HD DTH providers in India in 2019.